Working in Waterloo there’s so many lunch options, but sometimes you just want something you know you love. So 4 hungry gals, (2 expectant mama’s)  headed out for a late lunch at Waga’s. Nothing revolutionary but still amazing food and a decent price.

For those who have been living under a rock, Wagamama is a Japanese joint serving ramen and Asian style dishes, in very relaxed canteen’y style restaurant. When I say relaxed, you are literally brushing shoulders with the next table, as you’re all on one giant bench. The boy hates it as you have no privacy (I once overheard a real heart wrenching breakup, so awks) but if you can get over that, it’s quick, and so so tasty.

We glided straight on to the bench and ordered drinks. Samirah went for a healthy super green juice, with apple, mint, celery and lime, which looked a bit swampy but smelt great.

Anna had a tropical juice with mango, apple and orange. I was obviously celebrating that it was a Thursday and went for a wine.

So the deal is, they bring the food out as soon as it’s ready in any order. Normally I would hate this, but at lunch it’s cool as we’re all starving, and you don’t wanna be the rude dude starting when no one else has theirs. Here, it’s fair game- dive in.

And with that, our sharesies, chilli squid was plonked down.  Yummy chunky deep-fried squid seasoned with salt. It came with a chilli and coriander dipping sauce. Delish.

This was quickly followed by our mains.

My trusty fave, ginger chicken udon– number 44 😉 Teppan-fried udon noodles with chicken, egg, bean sprouts, spring onions, mange tout and chilli, garnished with pickled ginger. Nothing else could of fit in to this dish- I love it.

Holly was in a starter’y mood so went for two smaller things. Teppan-fried ribs in a korean barbecue sauce with mixed sesame seeds. They looked yummy.

And a bao, which I was very jealous of. A fluffy, Asian bun stuffed with Korean barbecue beef and red onion, served with Japanese mayonnaise and coriander.

Chains aren’t to be sniffed at- wagamama is up there with some of the best noodles and ramen around. Just make sure you’re happy for all your dining neighbours to hear about; The latest Tinder date / drunken Friday fail / last nights domestic / work boss rant.* 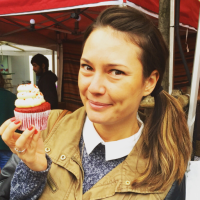